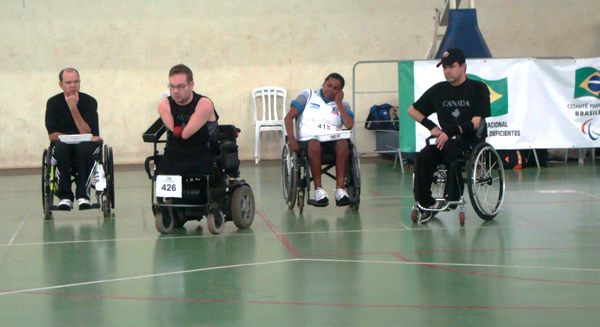 The Brazilian Boccia Championships came to a close last night and I am still feeling the sting of silver.  Here is something most athletes already know: winning bronze feels better than losing gold.

We had a great tournament in Maringá, Brazil.  The national association, ANDE, invited some Canadians to come and compete in their nationals, learn from each other and push both of our programs forward.  Marco and I were honoured to do just that over the past few days.

We competed in singles and doubles against great Brazilian athletes we have seen before at the Americas’ Cups, Parapanamerican Games, World Championships and Paralympic Games.  What was even better was to meet with new athletes, athletes we had met before, competition organizers, referees and politicians.  ANDE had the excellent idea to provide us with translators while we were here, so we could truly meet everyone – thank you to Melanie and Felipe who were excellent!

With our great social and cultural experience here and the political issues swirling around events like Sochi 2014, Rio 2014 and 2016, I am becoming convinced that athletes are the real diplomats.

In the singles event, I won my two pool games, advanced to the round of 16 and won.  Unfortunately for me, the draw put me with world #1 Eliseu Dos Santos in the round of 8.  The match started off solidly with me scoring a hard fought 1 point in the first end. It ended solidly too, with me keeping him to a single point against me in the last end.  But, Eliseu showed why he is world #1 in the 2nd and third ends, scoring 4 and 2 points respectively – beating me 7 – 1.  I was knocked out, but happy that Marco beat world #2 Dirceu Pinto on the court beside me 3 – 2 and it was great to watch him win bronze on Saturday morning.

Doubles was a sudden death elimination format.  While we didn’t play perfectly, Marco and I were in control for the entire tournament, which we loved.  In the final against a Sao Paulo team led by Eliseu Dos Santos, we were outplayed and came up short by one point.  Elite sport is not just about, winning, setting goals and achieving them though.  Our system and playing style is ramping up and we can’t wait to test it again soon.

A gruelling week is now topped off with 36 hours of travel back to Canada.  I can’t wait to get home and see Dalia, Karolis and Olivia.