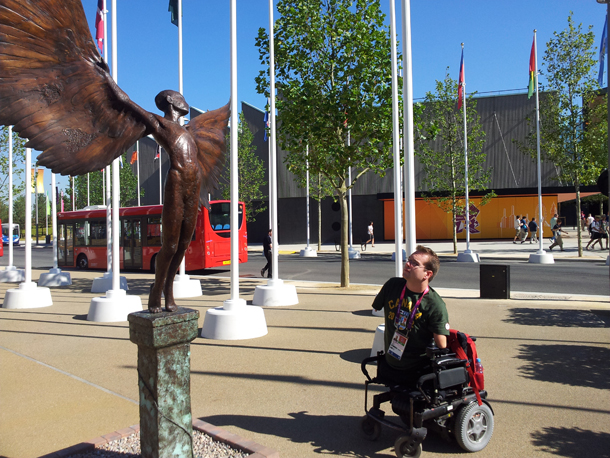 It has been about 10 months now since the 2012 Paralympics. It seems that most people ask me the same question. “When you were at London 2012, how was the Paralympic Village?  What was that like?”

I usually respond by telling them that it was awesome.  There were people from every part of the world there, wearing every colour imaginable. They had an energy that you could actually feel. You saw expressions and body language, and knew that virtually everyone there meant business. They better have. We were all about to try and be the best in the world at something.

I also tell people that it was a taste of utopia, or socialism that works.  No one is using currency in the Village, all meals are free and there was a 24-hour cafeteria.  To get to any sport venue, hop on any bus at a depot just outside the Village. Dedicated London lanes were yours. Flash your accreditation badge and you had the best seats in the house at virtually any sport. Even the vending machines are not operated by coins, but unlimited swipe cards. My Lithuanian wife Dalia and I noticed that the currency-free, pseudo-socialism of the Village works because it has an army of volunteers, National Paralympic Committees and corporate sponsors behind it.

What I don’t always tell people is that I barely noticed any of that until afterwards. When I was actually in the Village, I was too terrified to do much other than think about my game plan, train, eat correctly and sleep.  The atmosphere was tense.

Feeling fear thunder through me, and continue on to win a Paralympic medal has made me reflect on the nature of fear.  The London Paralympics was certainly not the first or last time that I would be afraid, but the energy I was expending was so focused, that I think the experience was valuable.

I wanted so badly to do well.  And, I knew that if things did not go as planned, all the hours of work, all the things I gave up to be there, everything I had invested would lead to nothing.

Have you ever felt that fear?

I had felt it before, at the 2007 World Cup when I was trying to qualify for the Beijing Paralympics.  Fear was coursing through me.  In our game of millimetres, by the end of that competition, we came one point short from finishing in the top 8. Because of ranking points, I did not make the cut for Beijing.  But, I went to China as a spectator anyways and cheered my teammates on. I watched my competitors and learned.

I think what I learned the most, was about fear.  In the 4 years after Beijing, we eventually qualified for London 2012, but I was always afraid.  I was petrified on the court, and at training sometimes, as the overwhelming challenge of the world’s top athletes loomed.

So we became good friends fear and I.  I controlled it with breathing and intentioned thinking: I know I can beat the top athletes in the world because I have the innovative strategy to do it, and I have put in the training hours.

But what if they still beat me?

I passed a huge winged statue each day outside the dining hall, which I later learned was made by London artist Nicola Godden.  At first I only saw the visual. A sad and beautiful winged figure. I still remember reading the inscription on its base for the first time, as my stomach was in knots for the pinnacle of tournaments to come:

“My audacity was my joy not my disaster,
I reached a glory higher than Olympus,
My fall was worth the flight.”

I realized it was Icarus.  When given wings to escape the island of Crete in Greek mythology by his father Daedalus, Icarus was told not to fly too close to the sun.  Overwhelmed by the thrill of soaring, he of course flew too high. The sun melted the wings’ wax, and Icarus drowned in the sea.

The statue and its words gave me final permission to fail.  Even if I did not win a Paralympic medal, I would go out in a blaze of trying something hard. That in itself would be worth it.

I ended up winning bronze with my doubles partner Marco, but I did not play as great as I did because I overcame fear.  I took the sheer terror of crashing into the sea those days in London last September – on the boccia courts in front of sold out crowds, and in the dining hall – and hung out with it.

I didn’t conquer it.