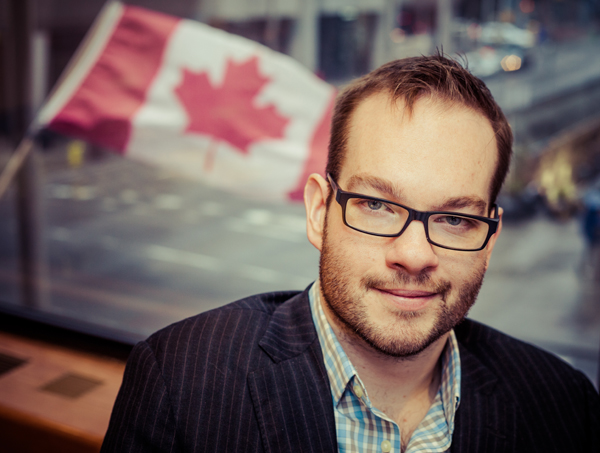 One of Dalia’s friends recommended we meet her at an art exhibition opening this weekend.  It was of an artist her friend knows, on Granville Street, where Vancouver’s art galleries are concentrated.  We planned to go and I was looking forward to it all week.  When we arrived, we were met with stairs.  No problem, we thought – this is Vancouver; almost everything is accessible here.

Dalia went up to inquire how I could get in.  There was no other way.

I really don’t enjoy being an advocate.  It is not very pleasant to complain and bring attention to troublesome realities. It is especially bitter when irksome issues are not anyone’s direct fault.

I am not sure if Elissa Cristall Gallery, where the exhibition was held, rents or owns their gallery space. From what I saw from the sidewalk, the second level space is quite stylish. In Vancouver’s property market, I am sure it is a valuable spot.

I am not sure what the BC Building Code has to say about accessibility. Access to the Code document is not cheap – behind a pay wall like that, perhaps not everyone who needs to consult it can.

[UPDATE – If a building was constructed before accessibility provisions in the BC Building Code came into effect, it is only required to become accessible when there is a transfer in ownership, or a major renovation AND to become accessible is “practical.” These are very weak regulations.]

The gallery we wanted to go to should not take all the blame though.  Sadly, the two galleries beside it, Master Gallery Ltd. and the prolific Heffel, that proclaims itself to be “Canada’s National Fine Arts Auction House,” were not accessible either from what I could tell.

So, I did what I had to do. I waited outside, while Dalia went up and met her friend and listened to the artist speak. They came down afterwards and it was a nice chat. I didn’t get to meet the artist, or see her work in person, but saw some of the photos on the Internet and my phone, taken by Dalia.

Most disabled people and their families have to fight for their whole lives.  We call it being an effective self-advocate. My parents had to fight to allow me to go to a French immersion elementary school instead of an essentially segregated one when I was small. Then they had to fight for me to have an assistant.

As an adult, I am ready to assert what I need, and go after it. It won’t always be easy as I go forward. A good advocate always needs to ask for what they want though. If we don’t ask, how can we get?

So what should I ask for here? Should I travel around with a lawyer on retainer to write threatening demand letters to force public places to become physically accessible?  Should I launch claims in the Human Rights Tribunal? I won’t make many friends if I take that approach.

I don’t have all the answers. I know making spaces accessible costs money and can be a logistical challenge. I know that I might have bought some artwork this weekend if I could have gotten into the galleries. These galleries don’t know how many sales they are missing out on.

I don’t know what the best outcome for this type of situation is. If I do not talk about it when I am explicitly denied access to a part of my community, it will not be dealt with, and others will be excluded too. I am not sure what I want to happen in the specific case of these galleries.

I do know that I wish I did not have to write this article. Being excluded from something that I really wanted to participate in hurt.

I submitted my feedback to the proposed BISFED draft rules earlier this month.  In respecting the process that they laid out, I only commented on rule changes that the BISFED Rule Committee had approved and were seeking input on.

I understand that BISFED is a new organisation and is just getting started as an international federation.  The amount of work for the volunteer board and committee members must be overwhelming.  However, I believe that the international boccia rules require a major revision.  I have set out below the changes that I believe should be made.  The response of the community will likely be, “radical changes like these must happen gradually.”  This is an understandable position, but I believe that the suggested changes below should be made immediately to drastically change our sport for the better.

First, the rules are drafted in many different languages and then translated to English, which is the official language of the sport.  The entire rulebook needs to be rewritten by an English-speaking expert in writing, to capture the actual intent of the rules.  The current rules are a nightmare of incorrect grammar, syntax and meaning.

Second, there is now a large push in the international boccia community to speed up the game while not losing the high level of play.  I submit to the community the following suggestions to address this goal, under two headings: Format of Tournaments and Match Rules.

This is a format that I am basing off of international fencing.  In fencing, pool bouts are fenced to 5 points.  After pool play, athletes are ranked, a certain small percentage is eliminated, and the rest move on to direct elimination bouts up to 15 points.

In boccia, we could adopt a similar model.  Pool play could continue as it is implemented now, only 2 ends would be played in pool play, instead of 4.

This format would mean that a call room is no longer necessary.  Now, athletes and teams must report to a call room 30 minutes before a match, or else they are disqualified.  This adds needless complexity to the organisation of a tournament and wastes time.

In the 2 end / 4 end proposal, all athletes in a pool would report to a single court.  As one match finishes, the next would begin seamlessly.  The players would know the order of their match, and if they were not present (in the washroom, warming up etc.) they would forfeit the match.

In the direct elimination round, athletes would report to their designated courts.  If they are not there at the posted start time, they forfeit.

Two-way communication between BC3 athletes and sport assistants should be allowed.

This rule is far too draconian, and it slows down the game.  This rule also gives an enormous advantage to BC3 athletes who are more verbal.  Two-way communication should simply be allowed.  Sport assistants should continue to not be allowed to look at the court.

Sport assistants now receive Paralympic and World Championship medals.  They are integral to the performance team.  The BC3 / Sport Assistant duo should be treated as a team.  It is not realistic to treat a sport assistant as a piece of equipment.  The result will be a faster and higher level of play.

BC3 sport assistants should be allowed to be the last to touch the ball on release.

The rule that a BC3 athlete must be the last to touch the ball, gives an unfair advantage to BC3 players who are less disabled – the game is now too focused on range of physical motion rather than aim and accuracy.  The length of the ramp should continue to be regulated by the size of the throwing box.

I know that some members of the boccia community think that ramps should be less technical and more standardised.  I have to disagree with this notion.  Figuring out the design of a BC3 athlete’s ramp is a major part of the thrill of the sport.  I think that in general we should allow ramps to be more complex rather than less, with restrictions like lasers, mechanical speed-ups and perhaps levels remaining.

Currently, some athletes are not eligible to play, because they are not able to release the ball with their body or a head pointer.  They are however able to direct a sport assistant to move the ramp, and they have designed a release mechanism that they can release, operated by pulley.  They are ineligible.  The solution should be to allow sport assistants to release the ball.  This would level the playing field, and be fairer for more severely disabled BC3s, especially those with CP.

Individual division time needs to be drastically reduced.  The entire time for a match should be allocated per match, rather than per end.

Most boccia enthusiasts that I know agree that boccia matches are too long, and too much time is spent between throws.  Time should be reduced, and time for the entire match should be allotted at once, to remedy this:

Throws should alternate, rather than be determined by who is furthest from the jack.

Although pétanque and bocce seem to use the same rule for throw order as boccia – the side furthest away throws until it is closer to the target or runs out of balls – lawn bowling, bowls and curling use an alternating system.

I believe that we should adopt an alternating system.  This would drastically speed up a boccia tournament by reducing time spent measuring between shots.  This would also allow for much more creative strategies, and potentially make it much harder to score large amounts of points in a single end.

After each Paralympic Games, the governing body of international boccia – now BISFed (Boccia International Sports Federation) – opens submissions for changes to the official rules.  The submission process from nations is now over and draft changes have just been announced, and can be downloaded here.

BISFed is inviting comments on the draft changes.

I have submitted to them written comments in the following areas:

I am presenting my proposals publicly and on individual pages, so that the boccia community can comment on each one separately.  An athlete was not on the very small committee that decided which proposals to reject or approve.  It is very important that we hear from as many players as possible so that the rules reflect realities of the game.